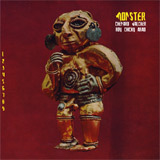 In October 2004, Chenard Walcker created a remix project called 'Middle' for Comfort Stand. The idea was to create tunes only using Comfort Stand material. It occurred that, for one of the tunes, Chenard Walcker sampled the voice of Roy 'Chicky' Arad, taken from his album 'Tourists, come to Israel, it's a nice country'.

Chicky enjoyed the result and contacted Chenard Walcker proposing to him to download from his website one of his poems, "The Owl". Chenard Walcker had previously worked with setting a poem to music on, 'Jaune Soufre' by Malika Saïd, a friend of CW. "The Owl" was written originally for the Venice biennale of art 2003 and will be published at Chicky's next book, his third poetry book. The main part of "Monster" is Chicky poetry on Chenard music.

Some might call this style Plunderphonics, but Chenard Walcker likes to refer to himself as a cut & paste addict, or a samplecore artist, whatever this might mean. He does not really think in terms of style, as he samples music from any style as long as it is good, although most of the sources in his works are from obscure late 60's early 70's material... He often uses several dozens of samples for one track. He has already made 250 songs you can download for free here. He takes elements from albums made by others to create new songs and his music is to be taken as an auditive photocollage as his visual art for which he only uses scissors and glue. This is a way for him to literally"put pieces together again".

Chenard Walcker writes, "I love Surrealist automatic writing, and working on poems I don't understand as musical material sounds very much like cadavres exquis, doesn't it? Many of my tunes use voices I can't speak : Ethiopia and many other Africa countries, Japan, Italy, the Netherlands, China, India..." He has already made 250 songs you can download for free here. And he has just launched a new netlabel at freesamplezone.org.

Chenard Walcker lives in la Goutte d'Or, Paris, France and Roy 'Chicky' Arad in Tel-Aviv, Israel. Two have come together to present to you this very special album.

The release date for album is on the same day as Roy 'Chicky' Arad's solo album, "Sputnik In Love" on WM Recordings.

Check out more information about this album on it's Comfort Stand release page.

Reviewer: Lynette Michaels - favoritefavoritefavoritefavorite - January 10, 2005
Subject: great!
lovely Surrealistic music...reminds me of Byrne and Eno's sublime collaborations such as "My Life in the Bush of Ghosts" and "Evening Star" or "Music for Airports" combined with William Burrough's-style voice-poetry. This is going on my iPod tomorrow so I can share with firneds at school...thank you! lovely sounds...! - Lynette